Continued from This American Girl in Morocco Part II: The Cost of Travel

The boys dismissively crossed, but I remained frozen. Each time the knife fell to the ground he lifted it again, hurling the weapon across the alley with compounding speed. The façade of the building crumbled from the impact.  His companion, unfazed, performed cartwheels and handstands in close range.

As the boys called my name to cross I remained stationary, laughing at the absurdity of my situation. I was terrified of somehow being caught in the crossfire, yet I was equally charmed by his bizarre behavior. Adventure is what I sought and adventure is what I found.

When the child directed his attention to the wall (which he repeatedly stabbed in a manner reminiscent of the shower scene in Psycho) I scurried past, my heart racing.

I had my own fascination with destruction of inanimate objects as a child. My mother’s “vintage” recliner can attest to this after I dismantled it one afternoon. Then there was the time when, certainly old enough to know better, I turned my sister’s single red rose, a gift from her boyfriend, into potpourri. In my defense it was temptingly placed on a wooden cutting board. Perhaps I found a kindred spirit in Morocco.

As the sun lowered locals ran excitedly down the streets carrying bottles of water, baskets of bread, and mounds of cookies. The impending dusk swept relief over the town. The streets soon emptied as families gathered behind azul doors to begin the ceremonial meal.

We chased daylight with a different goal in mind: to reach the Spanish mosque overlooking Chefchaoeun.

The sun set behind the hills and lights illuminated the city. Prayers surrounded us, projected through megaphones from the mosque in the main square. I sat perched on the edge of the hill, staring at the twinkling town below me. Behind me stood the long abandoned mosque, now housing only the occasional goat.

Mexico City and I spoke with ease and candor, removed from own our worlds, looking down at a foreign one. The others stayed behind, possibly in search of hashish.

After some time passed, we blindly crept down the mountain’s winding path, occasionally stumbling on rocks and tree roots.

In our absence the vacant medina transformed into a bustling community; restaurants opened their doors for celebratory locals, children ran wild in the streets, and merchants set up shop.

We passed a small café offering beautiful pastries both savory and sweet; much more tempting than the bland-clearly catered to tourists-meal we ate earlier. Desperate to find authentic Moroccan food I asked the owner if he served tagine. He replied no, but to my delight, offered to cook us a traditional Moroccan dinner the following evening. I was elated.

My brother in law, who has been a part of our family for the past ten years, spent the first eighteen years of his life in Morocco. His family comes from a Berber village in the Atlas Mountains and he was raised in Kenitra on the coast near Casablanca. My sister travels to his town often and brings home stories, spices, and more olives than customs should ever allow. His mother and sisters cook traditional meals in our home and teach my sister and I many recipes. Ramadan is a tradition our entire family has participated in, in some capacity, for years.  It is safe to say that I know Moroccan food. I also know how difficult it can be as a tourist to access authentic cuisine. I was determined to eat this man’s cooking.

The next day we hiked to the waterfalls in nearby Akshor. Before we left I insisted on confirming our dinner plans with the tagine man. The boys remained dubious.

Double buckled in a 1980s silver Mercedes, I sat in blissful silence watching arid hills pass, the winding road reflected in our driver’s gold-rimmed aviators. Moroccan pop played through the outdated speakers; an appropriate soundtrack for the visual masterpiece of the Rif Mountains.

We arrived in Akshor where mountains met rivers so clear curves of stones cast shadows on the pale dirt floor.

The path to God’s bridge was unpaved, requiring that we wade through water, hop across slippery rocks, and hug crumbling walls made of earth.

We joined the teenagers jumping into the water from large rocks along the way. I must have been an odd sight in my bikini with four men doing cannonballs off of cliffs.

Once at the waterfalls the boys jumped from above into the frothy pool below. I lost my nerve, and later regretted it.

A regret I reminded myself of recently when I nearly left the waterfalls in Costa Rica without jumping. Nevermind that my poor form sent me headfirst not far from the cliff.

The sun crept behind the mountains and the surrounding hills took on a purple glow.

We practically ran to the entrance where our cabbie was waiting. Leaving before sunset was imperative; our driver insisted he would leave us there if we were late. He, like me, gave hunger precedence over all else.

Back in Chefchaoeun, shop owners and friends of our beloved tagine chef enjoyed dressing me up in traditional textiles like a child clothing her baby sibling or kitten. The boys lined up to have their picture taken with me.

We waited as the café owner carried each course down the winding road from his home. Salads with smoky roasted peppers, soft-boiled eggs, and olive oil dressed cucumbers came first. Next we feasted on fork tender chicken covered in lemon halves, butter soft onions, and briny olives, spicy cumin meatballs draped in a comforting tomato sauce, and blistered garlicky grilled sardines, sopped up with pillows of warm homemade bread. Hollowed watermelons filled with plums, pears, and strawberries cleansed our palates before the fresh mint tea and flaky pastries made their way into our mouths then overstuffed bellies.

Mid meal elated children paraded past us shouting in celebration. They won a soccer game.

The shop owner, who wrapped me in handmade shawls earlier and joked about my worth in camels, insisted we take complementary refrigerator magnets for souvenirs.

With no bars or clubs to tempt us, we retired early. I was shocked by how reliant I was on alcohol for evening entertainment. Moroccans seemed capable of partying all night buzzing on nothing but sugary mint tea. With no drinking culture backpackers kept to themselves or their groups. I missed sharing travel stories over rum with Aussies. At times I felt disconnected or frustrated with my travel companions, but I was grateful to have them, and wondered if I had not sauntered over at the bus station if I would be completely alone. Weeks later, in Essaouira, I was alone.

The next day we headed to Fez, eager to reintroduce our livers to their favorite poison.

We never found it. Instead we were immersed in the very heart of Islam. 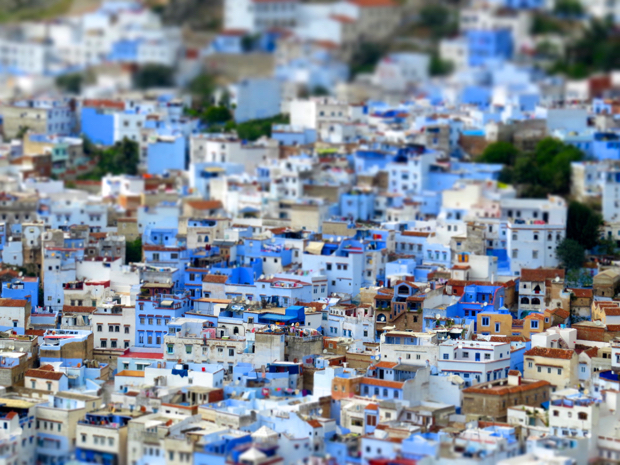